Bald Stockings was foaled in 1837 and is the first horse on record to have performed the classic running walk that is now known as a signature gait of the Tennessee Walking Horse. Tennessee Walking Horse biographer, Ben Green, notes that other horses came along to demonstrate the running walk before the great war (Civil War) flared and some of those horses were true heros of the conflict. Before, during and after the Civil War, people were more dependent on horses than that they are today. Having a sturdy comfortable mount was important since you were spending a considerable amount of time in the saddle.

By the 1930s, the Tennessee Walking Horse was becoming known as just a “pleasure” horse. While it was indeed a good pleasure horse, the people today are fortunate to have had true visionaries in the past who loved and believed in this horse, people who dedicated and determined to see it become what it is today – the most versatile horse you can proudly own.

In 1935, the Tennessee Walking Horse Breeders Association was formed began identifying the foundation horses of the breed. The association selected 114 Foundation Sires and Dams during a 15 year period. Federal recognition of the breed wouldn’t come until February 1950.

While Lewisburg, Tennessee was busy becoming home to the Breeder’s Association, there was also this little horse show 23 miles away in neighboring Shelbyville, Tennessee that started eighty years ago that we now call The Celebration. The Celebration began as a community project to showcase this amazing breed of horse and was started by four businessmen who didn’t even own a horse. The goal was always to put on a National Celebration of the horse with the first Celebration being a three day event. The first Celebration had to sell half of the wooden bleachers just to come out even.

Burt Hunter, the first President of the TWH Breeder’s Association said “I think too, that it is high time the Association, the owners, the breeders and the exhibitors realize there are two distinct types of Tennessee Walking Horse, the show and the pleasure type. Both are important and from a breeding standpoint, they are the same, and neither is more important than the other. Instead, a clear and more decisive way of looking at it; one has made the other. The horse you see in the show ring is the same horse you ride for pleasure, the difference is all in his training. He is weighted, pepped up and ridden with much speed. Our horses of today are show horses and rank along with the best of other breeds.” 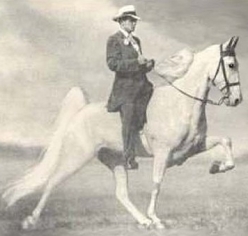 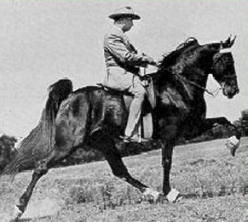 There  have been many changes throughout the years. The first Tennessee Walking Horses were flat shod but were shown with a set tail. This continued until the mid 1950s when horses started being shown with padded shoes. The pads were smaller than today, but the horses also wore weighted bell boots, often with chain like action devices under the weighted boots. In 1960, the Celebration required the bell boots to be removed and the leg and foot of the horses were inspected by the judges to ensure that there were no burns, cuts or lacerations. It is important to note that this practice began a full ten years prior to the enactment of the Horse Protection Act by congress.

By 1975, for the sake of transparency, weighted bell boots were no longer used and horses were competing with only the uniform chain linked action device. In 1988 and 1989, the maximum height of pads which directly correlate to natural toe length was established and the weight of the action device was limited to six ounces.

“The secret of change is to focus all of your energy, not on fighting the old, but on building the new.” (Socrates) The Tennessee Walking Horse industry is a prime example of focusing all of our energy on building a new, better horse while still keeping true to the breed. I’m pretty sure that there are not a lot of horse shows that would be celebrating 80 years if they had to sell half their seating just to break even. There probably aren’t a lot of horse breeds that would continue if they had to face the adversity the Tennessee Walking Horse has.

Change may not be for the faint at heart, but the Tennessee Walking Horse industry isn’t faint at heart. We’re a strong and determined bunch that love our horses and celebrate its uniqueness, versatility and beauty. We have built a better horse through careful breeding and training. We continue to celebrate our horse whether it is on the trail or showing on the rail. If you truly have a genuine interest in knowing more about the most amazing horse in the world, we’ll be happy to share the facts with you. After all, that is what this page was intended to do. If you have fallen for all the lies and propaganda spewed by animal rights activist and charlatans who only seek to line their own pockets or gain some type of notoriety, then please excuse us while we continue to walk proudly away from your drama and lies.